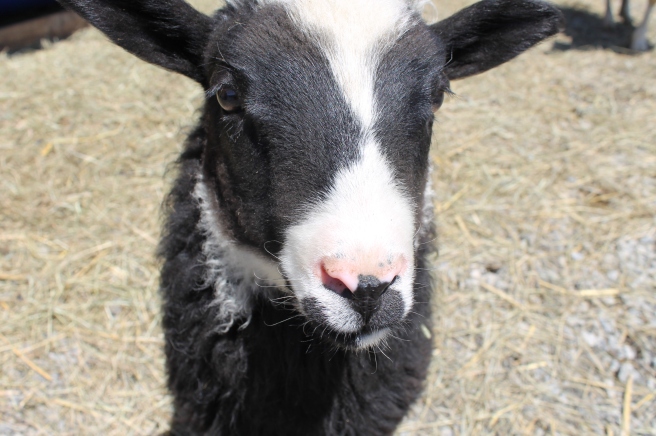 I was out of town all last week for work, an experience I don’t have very often. It was five days of hard thinking, wrapping my brain around new concepts and different ways of looking at things. I’ve never had instruction in curriculum design before, but my head is spinning with all sorts of potential applications, personally and professionally. There was lots of eating out with colleagues I never see face-to-face, which was so very nice, but damn, am I tired! I got home last Friday, and am still trying to catch up. 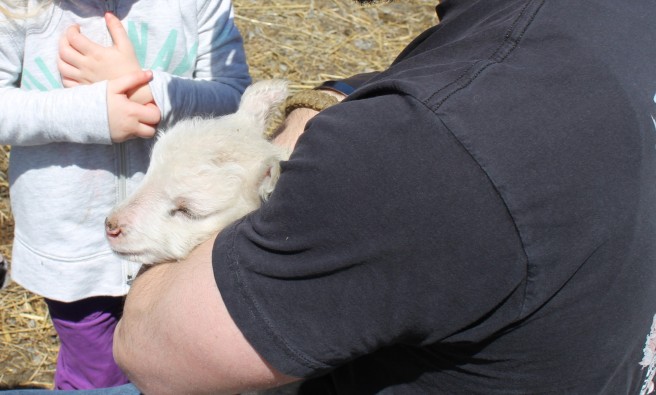 Before I left, our family had the chance to visit our neighbors over at Sweet Clover Farm and meet their little lambs. You might remember the open farm day they hosted last year, an event that was unfortunately canceled this spring due to all the late snow we had: there was nowhere for anyone to park! But with the snow finally gone, we were invited to bring the girls over to meet this years’ babies. We made friends with a sweet little man named Prince Valiant, and little Parsnip fell asleep in J’s arms, firmly solidifying his wish to expand into four-legged farming. I’m not completely sold on that idea, but something tells me I’ll get there eventually. They don’t call chickens the “gateway” critter for nothing… 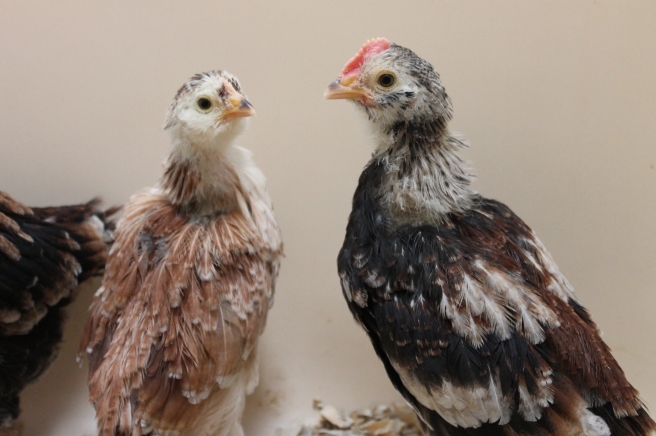 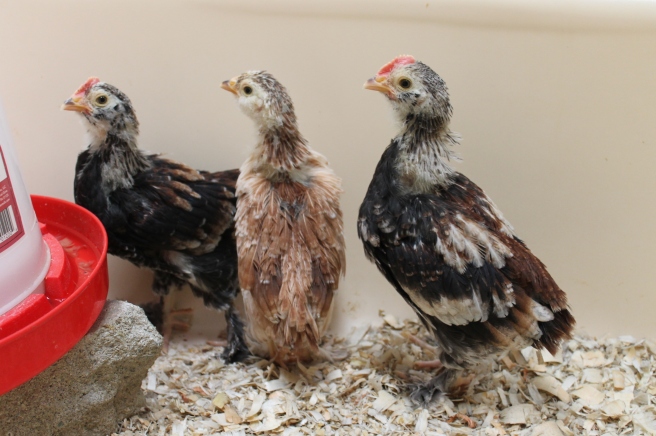 Speaking of chickens, our own babies are firmly in the awkward teenager stage. They’ll be five weeks old this Friday, and I think it’s clear that we have two cockerels and two pullets. You can see the difference in their coloring and their combs above, the darker birds being male, and the lighter being female. I had to look through my blog posts to remember that we moved the chickens outside at this same age last year, but it was a good three weeks later into the season. We also didn’t have to integrate them into an existing flock, which presents some logistical problems for our current setup, so these little nuggets will be staying in the bathtub a while longer. I’m finding they’re not nearly as messy this year, which is probably a combination of using the larger tub and the fact that there are only four of them.

Salmon Faverolles are known for being docile and friendly, even the roosters, so we will probably keep them all. They do have funny feathered feet with five toes (as compared to three!), so that’s been a little bit different. I’m working on a post compiling all that we’ve learned over our first year of chicken-keeping, so if there’s something you’ve been wondering, drop your questions in the comments!

Our first double-yolk egg. You can see the size comparison on my Instagram.

Here come the radishes! New Harvest Crate announcement tomorrow. 💛
Rhubarb! The first real harvest of the season around here. The plants are larger than I’ve ever seen them, with huge elephant ears for leaves. They’re also trying to flower earlier than I’ve ever experienced. I’ll have to keep cutting and freezing (and selling!), but preferably without further injury. That one hurt. 🩹
Did some hive cleanup this morning! 🐝
Late night tea and seed sorting. 🫖🌻 Dreaming of flowers and trying to remind myself that it’s not a race, and there’s no such thing as “behind.”
Sound on! 📣🐝
For all the making I do, I’ve never sewn an actual garment that is meant for daily wear - something other than aprons or Halloween costumes. Frankly, I was scared. It seemed too daunting - too many skills required (zippers! button holes!), too much investment in materials. What if I royally screwed it up? I’d feel so guilty for wasting the fabric. 🤷🏻‍♀️