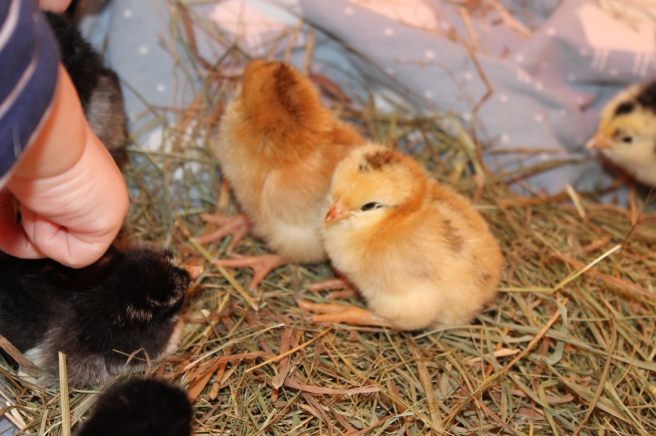 I have six chickens in my bathtub.

Pinky and Cinderella are Red Comets, and were named by Beanie and Swee. The other four are yet unnamed: two Silver-Laced Wyandottes and two Black Australorps. Swee has asked J and I, and Gramma and Grampa-rampa if we “have any names in mind,” and is set on boosting Cinderella’s self-esteem as only an almost-four-year-old can (“Good girl, Cinderella! Good girl!”). I’ve read time and again that you shouldn’t name your birds if you have any plans of dispatching them to the soup pot upon retirement, so I suppose that decision has now been made.

April has been a bit of a difficult month for us. We’ve experienced more than one setback, each of a different sort, but together bringing us to the same result: we will be renting longer than we had hoped. And so in a desperate move to avoid that feeling of being stuck and helpless and lacking forward momentum, we texted our landlord to see if he minded a few chickens in the yard. The response came swiftly:

We struck out at Tractor Supply yesterday, despite them having dozens of peeping chickies just two days prior, so scoured Craigs List last night in search of someone local. J hit the jackpot when he found a guy not far from Swee’s nursery school who hatches several breeds in his garage. I’m far happier having supported someone in the community, and feel good about the little birds having been cared for in a clean, healthy, and low-stress environment before coming home with us.

We did things slightly backwards, and got the little critters home and into the tub before having a completed coop. Granted they’re too small to be in the yard just yet (it SNOWED most of the day today), so I suppose it’s not such a big deal. We do have the coop started though, and I’m excited to share it with you when it’s done. It’s certain to be an original!

My husband tends to acquire things. This habit of his often comes in handy, as he’s drawn to useful items. Yesterday he went on a mission and came back with enough of those useful items to create a chicken coop using only salvaged materials. We sketched out a rough plan based on some Pinterest ideas, and I think we will only have to purchase a few things to enclose the run.

Until then, I’ll be researching chickens a little more in depth than the light reading I’ve previously engaged in, and coaxing Beanie to be “so gentle” as she pets Pinky and Cinderella, teetering over the edge of the bathtub.

4 thoughts on “Pinky and Cinderella”