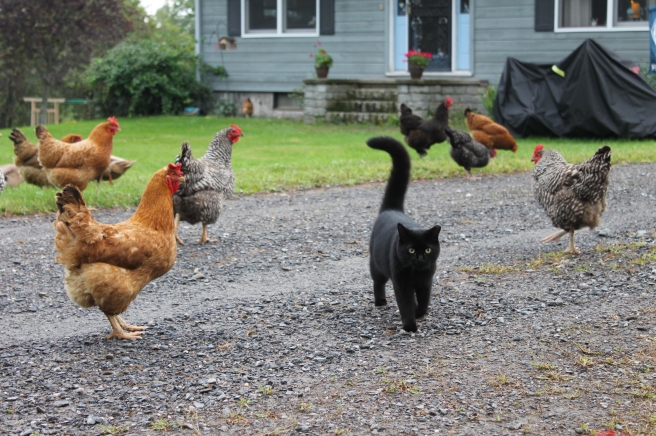 Our first chicken coop was a beast. We were still scraping our life back together at that point: paying things off, fixing our credit, renting a trailer. We needed to do something that would tangibly set us on the path toward our goals and remind us why we were hustling so hard. On a bit of a whim, J sent a text to our landlord, asking if he minded chickens. He didn’t. So we brought six chicks home and settled them in the bathtub.

We’d need a coop before long, so J got to work. Using an old tabletop as the base, he added 4″x4″ posts as legs, a bookshelf sliced in half as nesting boxes, and asphalt shingles given to us by neighbors. Fort Knox is a beast of a chicken coop, weighing a ton and costing us next to nothing to build – $50? $100? I can’t remember now. We moved it to the new house, and now use it as our transition coop – a space for the teenagers when they outgrow the brooder box.

The next coop was just a corner of the existing barn with roosts and nesting boxes added. It seemed the perfect solution: plenty of ventilation, existing electricity, an outside wall for a hatch door to the run. J caulked up any gaps in the boards and laid a new plywood floor, and our flock grew to 25 birds. And then the first spring thaw happened. Everything flooded. There was water and wet bedding everywhere, and we were in a panic about how to keep the birds healthy and safe. It was a total mess. I hope this was a fluke,  I thought. I hope it doesn’t happen again next spring.  All winter I skated down the little hill to the coop, bringing fresh water, serving scratch, filling the feeder. And then everything flooded again.

Chickens have delicate respiratory systems. Dirty bedding gives off ammonia which will make them sick, as will damp conditions. The two combined is a deadly recipe. And a sick bird hides it as long as she can. By the time your chicken acts sick, it’s almost too late to save her. We’ve lost a hen to a respiratory infection, and we’ve saved one (my then nursing student husband injected her with antibiotics – yikes!). A flooded coop is more than just a bit of water; it’s a chicken health nightmare.

Clearly the barn would continue to flood each year, and just as clearly, we weren’t going to give up keeping chickens. A new coop was needed.

It took a lot of time and thought to make this decision. We looked at photos and walked the property to assess the springtime water flow. We chatted out pros and cons of multiple sites, considering access to the house and electricity, snow removal needs, aesthetic appeal. And then we pulled the trigger, so to speak. 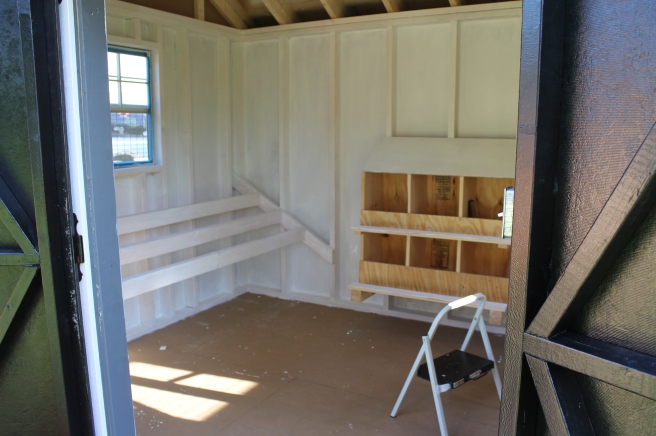 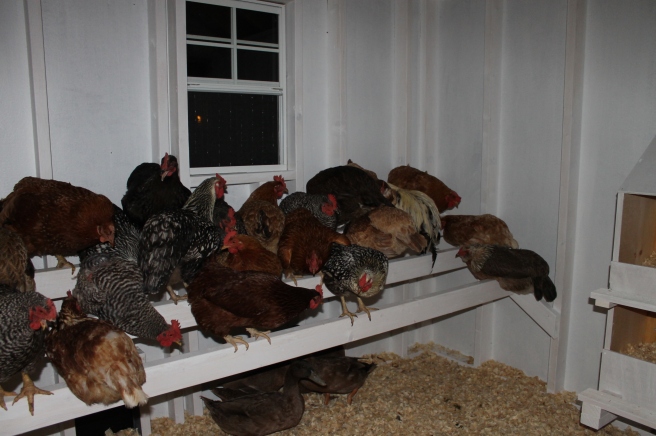 Delivered the first week of July, it’s Amish construction by Horizon Structures – the same Pennsylvania company that has built coops for Lisa Steele of Fresh Eggs Daily and Melissa Caughey of Tilly’s Nest. Pre-run for electricity, it’s got an outlet and a light fixture, and it’s rated for up to 40 chickens.

We’ve made some minor modifications already. We painted the interior white to lighten things up. We added a hook and eye inside the storage area door so that the chickens don’t swarm in while we’re filling their feeder. J installed a lip at the man doors so that the bedding stays inside. We discovered the need for a barrier at the bottom of the caged storage room so that the bedding stays where it’s supposed to be. Small tweaks to make it work for us and for our flock.

It’s beautiful. It meets our needs now, and any future needs we could anticipate, and it will be really nice not to take my life into my hands each time the flock needs fresh water this winter. That icy hill was no joke. 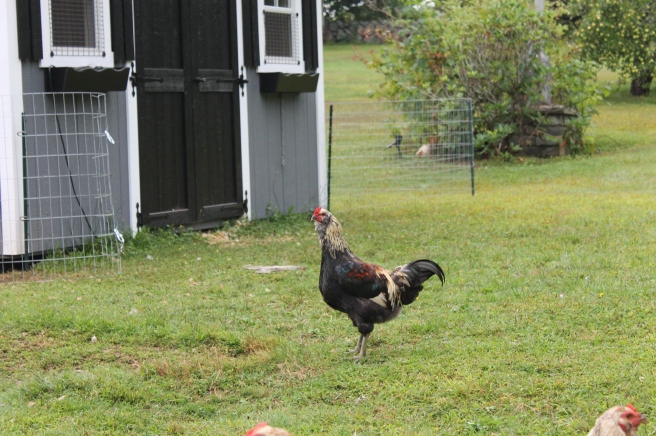 Some days, I am still stricken with buyer’s remorse. It feels disingenuous to have paid for such a luxury when we are trying so hard to be self-sufficient in all other areas – despite the knowledge that we sketched everything out and were in full agreement about the value of and need for such a purchase. I think that’s just part of life – making the best decisions you can with the information you have, and trying not to second guess yourself every step of the way. I’m sure the chickens are just happy to have a warm, dry house, so I should be too.