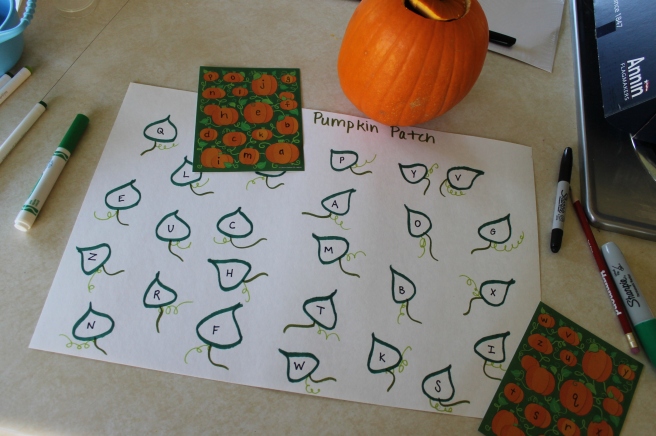 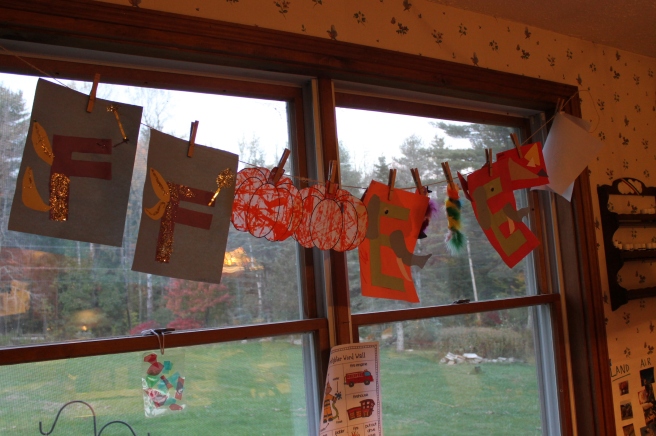 Pumpkin Week was a total hit. I have to admit, this unit was somewhat easier to plan than others because there are so many ideas out there to be borrowed. A simple Pinterest search led me to something for every subject area – why reinvent the pumpkin? This is such a great, flexible topic because you can use it any time in October or November.

We kicked off the week with our pumpkin themed library selections. You can check them all out via my Instagram feed in the right-hand sidebar. Pumpkin Fiesta led to great multi-cultural conversations, and we enjoyed talking about building community in Too Many Pumpkins.

I wanted to try process art with the girls, so we planned to do some acorn painting. We have oodles of acorns in the yard, and I thought they’d make some great, wobbly lines across the paper. In reality, they were too light to roll, so we ended up switching to marbles partway through. I printed the pumpkin templates here, and taped them into the lid of a banker box, dabbing a blob of paint at various points around the edges. Swee and Beans each took a turn rolling the marble through the paint and over their pumpkin. The blogger whose idea I borrowed suggested we peel the tape while the paint is still wet so it doesn’t set, which was helpful. When they were dry, the girls cut their own pumpkins out (I helped Beans a little) and we hung them up. I think they turned out really neat, though we are now out of orange paint.

I’d also been wanting to do some upper and lower case letter matching, and had seen an idea to use a paper plate and clothespins, but didn’t want to write on the pins I use for laundry. Swee loves stickers, so I ordered these pumpkin stickers and wrote a lowercase letter on each of them to be matched up to their uppercase version in the pumpkin patch. We had a great time with this one, though I didn’t anticipate her insistence on making it look like the arbitrary vines I’d drawn were actually attached to the stems of the stickers. We ended up with what looks like floating pumpkin balloons, which is rather comical.

Daddy usually does science and math on Tuesdays while I’m working, though last week I took the day off to chaperone Beanie’s field trip to the pumpkin patch. We were able to bring home two small pumpkins to use for Pumpkin Science! Daddy walked them through the scientific method as they made observations and a hypothesis on whether the pumpkin would sink or float. The worksheet came from Natural Beach Living, and had some great ideas. Both girls really liked the activity, and I love when something I’ve planned works well for both Sweebee and Beans.

It was a fun week for us, and flowed really nicely – which I know won’t always be the case!