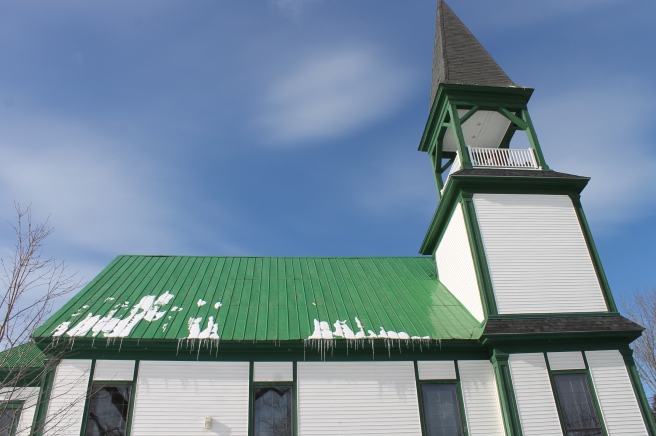 We’re less than one full week into my #FrugalFebruary experiment, but have arrived at the first designated checkpoint. It was a fairly easy beginning, with little temptation. Our regular grocery trip fell in the last days of January, so I filled up the gas tank on that same outing and haven’t personally spent anything outside of the parameters I set for myself. So far, so good.

I realized on the first day of the month that we have an event coming up next Saturday – the annual Daddy/Daughter Dance. It is pretty rare that we have a need for toddler tights and Mary Janes here in the Maine woods, but if ever we do, this dance is probably the reason. We did a quick scramble yesterday to try on outfits, and though Sweebee’s tights are a bit tight, I think we’re good to go. It’ll do.

Besides that little failure to plan, I’ve had a couple of other realizations that really only affect me. I began a new cross stitch project, and found that I don’t have all the floss colors that the pattern calls for. Just today I sat down at the sewing machine to work on some baby gifts, and ran out of white thread, though I’m pretty sure I have another spool knocking around here somewhere. In these cases, I’ll see what I can borrow from my mom and another friend who offered her stash. Worst case, they’ll just have to wait.

I spent $4 of a gift certificate on local eggs at the country store in town. Our girls aren’t laying enough to feed us, and we really don’t want to go back to those pale store-bought eggs. Even the cage-free kind are no comparison to what backyard flocks are capable of producing. I would have bought them even without the gift certificate and rolled the expense into the grocery budget.

I knew I wouldn’t force my family to play along, which I suppose is good since J thinks this endeavor is stupid. Ahem. He bought chips at work one night because he forgot. Today he is frustrated with me because he doesn’t want to wear his normal work clothes to the dance next week when his girls are getting all dolled up. His argument is that he never buys anything except snacks, so what exactly am I trying to prove by not spending money for a month?

So it’s been an interesting start, and I think the challenge is going to begin in earnest as we move into week 2. I have one class left on my yoga pass, but feel strongly that weekly practice is important for my well-being. I’m trying to decide if using birthday cash on yoga violates the terms of the project. I took the truck to class this morning and came home to the hood popped on my car and a frustrated husband swearing at a vehicle that crapped out on him (twice) after dropping the girls at their grandparents. We have no idea what’s wrong with it, so he’ll be calling the mechanic tomorrow. I will need to go grocery shopping this week, Tuesday at the latest. My plan is to eat a solid meal before leaving the house and pack a water bottle to avoid impulse purchases.

Jill wrote a bit last week on prioritizing your spending, particularly in regard to beauty routines and self-care, and one of her readers commented on the fine line between intentional frugality and asceticism, which I thought a good point. If buying a new button-down will make J feel good when he takes our girls out on their date, and he will wear it to work, then it’s not really a waste of money. Neither is investing in myself with a new yoga pass when it’s the only regular thing I do for myself. My fear is opening that gate, and falling into the habit of over-indulgence, so I suppose mindfulness is the real goal here. Keeping the reins held tight.

If you’re following along with this no spend month, how was your first week?

One thought on “frugal february – week 1”

Our first #poetryteatime of the year! We revisited the passages in #charlottesweb where Avery and Fern grab donuts for breakfast, and Templeton learns of the incredible gluttony found at the fair - complete with our own donuts and popcorn. 🍩🍿We capped things off with all the spider and pig themed nursery rhymes we could find. 🐖
The first tree is ripe, so the rest aren’t far behind. Our 16 tree orchard is a mix of Golden Delicious, Red Delicious, Gala, and Macs, and a potential Cortland - at least those are John Bunker’s best guesses. We took a selection to MOFGA a few years back with the hope of IDing them.
Twenty Red Rangers, raised on pasture, 11 weeks from chick to butcher. Ten for a friend and ten for us - but we bartered one for honey and one for lumber to build the chicken tractor. I’m perplexed by the way their final weights varied - we’ve got several 8 pounders, and two that didn’t even break 5 pounds, despite having the same access to food and water.
She’s not fast or fancy. She doesn’t even have a name. But she’s ours, and we’re having so much fun getting to know her.
Magic Molly potatoes and cherry tomatoes - both available in the farmstand today!
It’s almost tomato time! 🍅