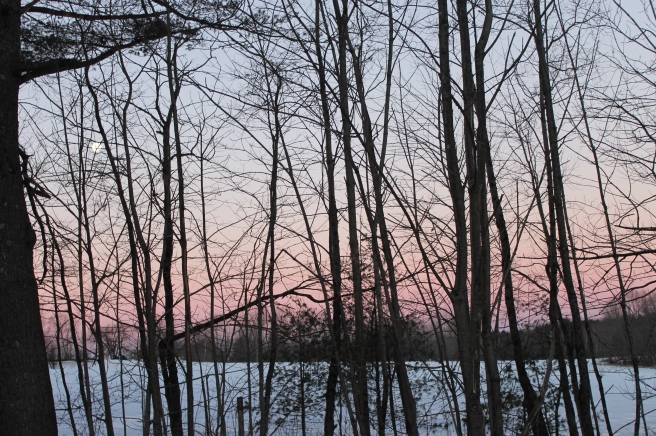 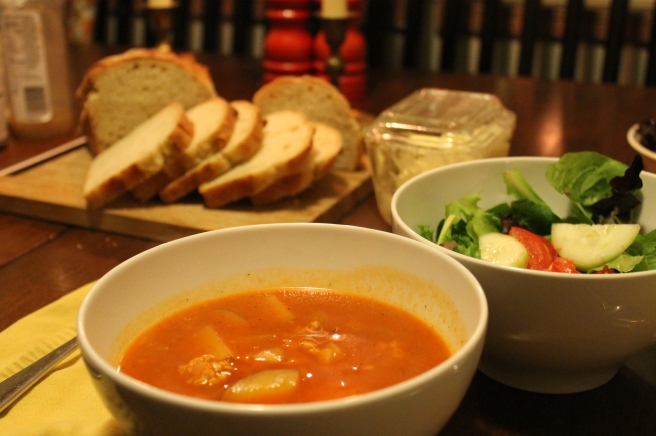 – I ducked out for several hours today and went for a drive to explore an indoor flea market. It was a bit further away than I planned, but upon arrival, I was greeted by a three-story warehouse filled with vintage goodies. It’s been quite a while since I’ve been truly alone (with no prescribed task of grocery shopping or holding down the fort after bedtime) and it was a bit of an odd sensation to wander alone. I wandered and poked around for close to two hours before joining the line to check out. The guy working the register chuckled when he saw my shopping list, a complete necessity to keep from becoming overwhelmed by the sheer volume available, though I admit, rather silly. I didn’t find everything I’ve been looking for, but did come home with a gorgeous Pyrex mixing bowl and a 9″ pie plate, a crock for kitchen utensils, a pretty hankie and a cookie cutter, and two maple lollipops for my little ladies. Total spent: $21. I’m still looking for a pair of milk glass candle holders and a telephone table for the foyer, along with several other little things.

– I stopped on the way home to snap a couple photos looking down on the Alpine ski school nearby. The lake below is frozen and the snow machines are pumping.

– Spicy potato soup and homemade bread, the first loaf I’ve baked myself here at home. My girls wouldn’t eat the soup, even in a milder state than written, but it was a nice, warming meal.

– Music! For how important music has been in my life, I realized we rarely play anything during the day. I find that with the constant input from the girls, I just can’t handle the additional layer of noise. It makes me a little nutty to have songs playing on top of our normal conversation and chatter. And yet, I believe so strongly in the importance of music, of all kinds. I’ve been trying to play Pandora while I prep dinner or do the dishes so that the girls are exposed to all different kinds of sounds. We had a dance party the other night to Taylor Swift and then moved on to Mama’s favorite CSNY songs.

– Sweebee and Beans were gifted subscriptions to Little Passports for Christmas, and have enjoyed the science experiments that were included in Swee’s first kit. They built a volcano with daddy this week, and we’re preparing for an eruption tomorrow.

And so we move into a new week.

It may be just “false spring,” but the hens have decided to become overachievers! And those yolks! Pure orange. 🧡
Breakfast for the Yard Panther. 🐈‍⬛
Our month on the #threeriverschallenge has come to a close. In some ways, we could keep going: we have vegetables left in the freezer and in cans in the basement; our chickens are laying more eggs, and I have a lot of tuna left. I’ve still got sauce in the freezer for pizzas!
31 hours in January! We’re tracking our hours outdoors this year with @1000hoursoutside and have been going out for a bit almost every afternoon. The girls (and Zero!) are loving it, and while J and I often join in, it’s sometimes a nice break for us while they get some independence. 😉
A late afternoon #poetryteatime by the wood stove yesterday. It was too cold to be outside other than to do chores, so we snuggled up instead. Look at that light! Two months ago it was dark at this hour. Just little nibbles so as not to spoil our dinners: a bite of pumpkin bread, and a small slice of rye, still warm from the bread maker. #thisishomeschool #chickadeehollow
Fed the bees today! 🐝