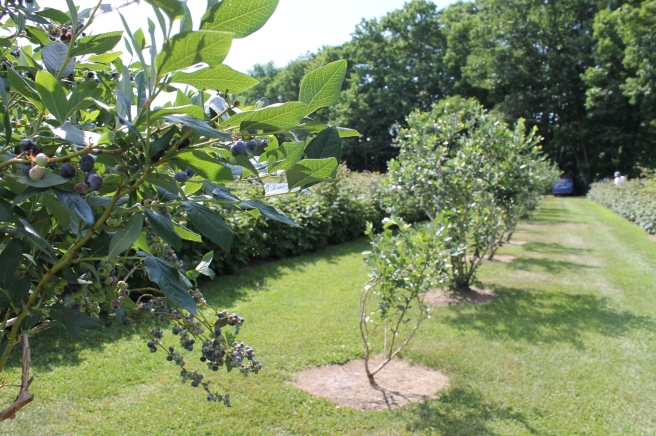 We came home with four pints of berries and two very stained little faces for $11. I have to say, I think we got the better end of the deal because I’m positive those little girls ate at least a pint between them, maybe more. Swee filled one of the pint boxes we purchased, though her hand went to her mouth just as many times as to the carton. Beans didn’t even pretend; every single berry went into her tummy. Together they charmed two different grandpa-types, both of whom “helped” them pick despite being strangers five minutes before.

We plucked the first cherry tomatoes this morning, and soon after, found a cucumber hiding under the leaves. My big helper, who doesn’t care for tomatoes, distributed her finds to everyone else, and the first cuke went to work with daddy in his salad. 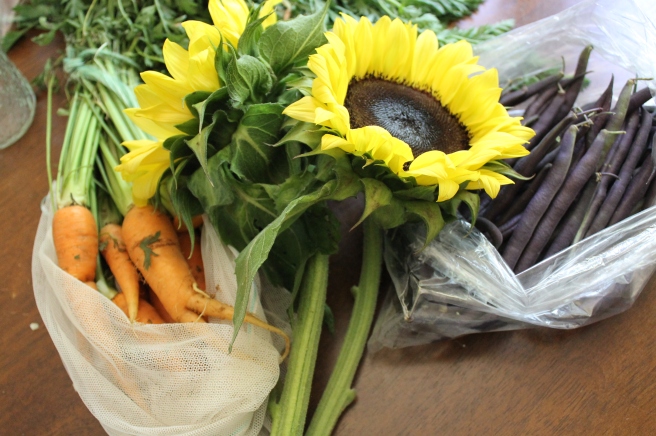 We made it to the farmer’s market this afternoon for the first time this season. It was bustling and lively. Cars lined both sides of the road, and boats were coming and going from the dock at the rear of the market space. I remarked to J at one point that it was wonderful to know people now, though how interesting to realize that everyone we knew was working, not shopping. I suppose that’s what separates the tourists from the locals. The ice cream bus, the woman selling handmade dresses, even the mandolin player – all acquaintances from our little village. We bought carrots and kale, purple beans and sunflowers, and two strawberry pops that were gobbled before making it into a photo.

With the girls in bed and J at work, I let the chickens wander the yard as I poked around in the garden. Out came the last of the chard, three tomatoes and three more cukes. I moved some broccoli that was being crowded out by the volunteer sunflowers (cheeky chipmunk planting birdseed!), and pulled a few weeds. I’ll need to make sure my pickling supplies are stocked up because I think we’ll be buried in cucumbers soon.

It doesn’t get much more local than this. From the berry farm two miles away, to the market with vendors and growers from around the area, to our own scrubby little back yard, right now it’s easy to eat locally. It’s an area in which I need practice – mainly learning to plan the menu around what’s available rather than the shopping trip around the menu. I think we’re almost at the point financially where the grocery budget won’t have to be what suffers when things are a little tight, which will do wonders for the choices I’m able to make. I’ve gotten really good at feeding us healthy food on a small amount of money, and haven’t fallen into the trap of buying processed crap, for the most part (there are always a couple of snacky things that wind up in the cart). But I’d like to make a shift to a more local diet.

I don’t know what that will look like when the weather shifts. I don’t know if I can convince the girls to eat root veggies, or J to forego meat – the latter not because it’s unavailable, but because I think it will still be out of our price range.

I’ve been reading a lot about food lately. I finally finished The Omnivore’s Dilemma which I started way back in my Food & Politics class at Johns Hopkins. I read Animal, Vegetable, Miracle and marveled at their family’s ability to produce so. much. food. To be honest, I struggled with both books, a little bit, and I think it’s because both authors were coming from a place of such privilege – money, connections, land. Great points were made, and there was so much interesting content, but it was a little hard to connect.

I finished Ben Hewitt’s The Town that Food Saved just this weekend. I don’t usually buy books, but picked this one up at our local library’s used book sale for a dollar because the title grabbed me. I was doubly interested when I saw the author’s name, because I thoroughly enjoy Ben’s blog. His tale acknowledges that eating locally can be a real challenge when you’re living paycheck to paycheck, and dives into what needs to happen for a local food economy to really be a viable option for normal people. It was an interesting read.

So! As with everything, we’ll keep taking baby steps.

I’d be interested to know what successes (and failures!) you’ve had on this same journey, as well as any tips for us!

2 thoughts on “eating locally (at least for the weekend)”