My glider is back together! This is where we started:

And this is where it is today:

I knew when we pulled it out of the weeds that it would never be pristine, no matter what we did to it. We just don’t have the tools or skills to strip all of the paint down to the metal, and it was pretty badly rusted in some places. But I decided that I wanted to do what we could to make it functional without breaking the bank.

When J took the bench off of the frame for me to clean, I realized there were at least three coats of old paint peeling and crackling among the patches of rust. After hosing it off and letting it dry in the sunshine, I dove in with a wire brush and quickly switched to a small beveled putty knife. The grass was littered with flakes of forest green, mint green and butter yellow when I called it quits.

Neighbor Barbara suggested a Rustoleum product called Rust Reformer to use as a base to stop some of the deterioration. I used a full five cans of that, partially because I wanted to make sure I got a good layer on, and partially because I’m not very skilled with a spray can. This returned the bench and frame to a nice flat black, which actually looked really even. You couldn’t see any of the imperfections. I was tempted to change my plan and keep the whole thing black, but I really wanted to go bright with this.

We chose a new Rustoleum color called Gloss Light Turquoise, and on our first shopping trip, we seriously underestimated the number of cans we’d need, only buying two. After using five whole cans of the black, I went in search of more blue and struck out at three different stores. Barbara came to the rescue again, and picked up two more cans for us. In the interest of not wasting paint this time, I asked J to do the blue. There’s enough left to do the frame, but I kind of like the contrast. I think we’ll live with it like this for a while and see how it goes.

The surface definitely isn’t perfect, which is due both to paint that wouldn’t come up and sections of the metal being terribly pitted from rust and age. It’s possible that a darker color would help hide the texture, and when the time comes to repaint, maybe we’ll try something different. For now though, I think it adds character, and the girls love to use it. Swee and I enjoyed our breakfast and a little “rocka rocka” outside this morning and it’s particularly enjoyable in the evening with a glass of mama juice. 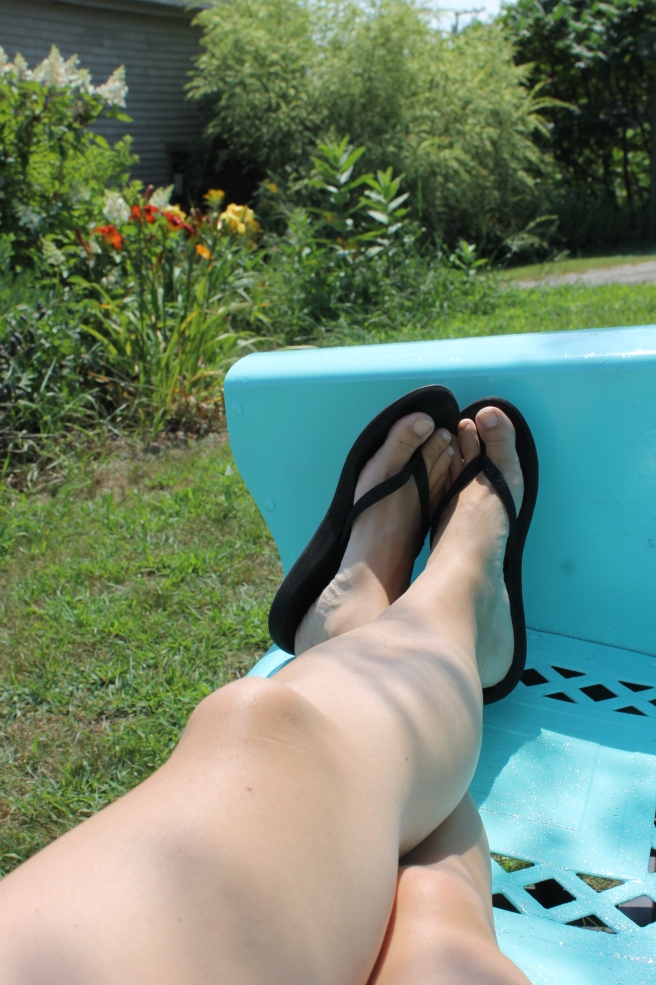